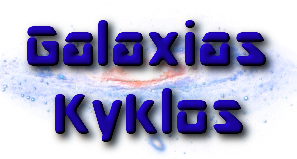 Getting Around the Galaxy

Most ships impulse engines can achive light speed. This is sufficient for interplanetary travel within the same system. Interstellar travel requires a Gravity Manipulation Drive (GMD) which can achieve faster than light speeds. Traveling farther than system to system via GMD is very dangerous and requires extremely advanced navigation computers. So for those that need to travel cross-galaxy, there are jumpgates that use an advanced space-folding technology known only to the Nibirians. Jumpgate travel is very expensive and regulated by the Galactic Authority.

A privateer-run station, Bliea orbits the outer rim of the Aquilie system just beyond Photine. As far as privateer stations go, Bliea is the most organized and regulated of them. While most privateer stations attract bandits, thugs, and the derelict of the galaxy, Bliea is a true privateer station. The station is loosely regulated by the Virago Empire, so only "honest" business is conducted among the smugglers and pirates at Bliea.

As well as being a galactic trading center, Gesnilia is a Galactic Authority outpost and is home to the Aquilie jumpgate. It's orbit is located between Pavonis and Cosmas.

Any Virago that has aspirations of becoming a warrior in the Virago Empire dreams of the day they will be accepted to go to Lyrae. This planet houses some of the most advanced military training facilites in the Milky Way. Only Virago females who pledge their service and alliegence to the Virago Empire are permitted to train at Lyrae. Many cadets spend up to ten years in training and academy on the planet. The Virago prefer to keep their military training practices a secret, so no outsiders are allowed on the planet. Any business with outsiders is conducted at the base situated on the planet's moon, Lyn. Any goods and supplies are then shipped from Lyn to the planet by the cadets.

The capital planet of the Virago Empire, Pavonis is home to one of the most feared military units in the galaxy, the Stratigos of Pavonis. The Stratigos are an elite force of Virago soldiers who are famed for ending the Second Strahg Uprising. It is also rumored that even the Galactic Authority won't go near Pavonis for fear of the Stratigos. The Matriarch Supreme, ruler of the Virago Empire, commands from this planet. Pavonis also host the bulk of the Aquilie Armada. None outside the Virago goes to Pavonis for a nice visit, only business, even then for short periods of time.

Homeworld of the Virago

The Virago pride themselves on the beauty of their homeworld, the 2nd planet in the Aquilie System. The planet consist of a gigantic and mountainous super-continent the Virago call Eudocia. The mass of mountains that make up the vast portion of Eudocia are either uninhabited or home to the "primitive" decendants of the ancient Virago mountain tribes. The coastlines of Eudocia are heavily dotted with large immaculate cities around the single ocean called Onesimus. The architecture is very simular to that of the ancient Greeks of Earth. Indeed, some Humans theorize a Virago influence on Earth's ancient culture. Large open-air buildings, intricate stone columns, and ornate statues and reliefs adorn all Viurian cities. Viuria host galactic embassies for Eridani, Kornephoros, Sarhgas, and Sol systems.

Culture and Society
The Virago are an extreme militant society. From the time a Virago is old enough to stand on it's own, they are taught the ways of hand-to-hand combat, military procedure and drill. When a Virago female matures into an adult (around the age of 14, by their standards), and is deemed worthy, she gets sent to Lyrae. There she spends up to 10 years training in all forms of combat as well as military tactics. The training includes ground, naval, air and interstellar combat. Only those who excell in all these fields will be considered to become one of the Stratigos of Pavonis, the highest honor a Virago female can achieve.

Virago males are subdugated by the females of the race. They are taught early on that the feminine of the species is superior, and that their role is to serve. Males never become soldiers in the Virago Empire, however, they may be subjected to conscription if needed during times of war. In some of the more primitive parts of Viuria, where Virago worship the old dieties and practice the old ways, men are mere slaves and considered property of their mistress.

The Virago empire is ruled by an elected official known as the Matriarch Supreme, who is always chosen from the Stratigos. She is aided by a council of seven elected officials, each representing Lyrae, Pavonis, and the five regions of Eudocia on Viuria. All matters of politics are voted on by the council, but it is the Matriarch Supreme who has sole command of the Virago Empire's military and armada.

According to Ept legends, Ehiv, not their homeworld, was the location where the Anunnaki (Nibirians) made first contact with the Ept. The entire planet has been dedicated as a holy site by the Ept. Huge pyrimid temples to the Anunnaki dot the landscape of Ehiv, with the largest being at the said location of first contact; Eutis. All of the faith are welcomed by the Ept to visit and meditate on Ehiv. The planet is a spiritual and tranquil place, and the Ept go out of their way to make it so. There are strict noise ordinances in place and only certain types of spacecraft are allowed in atmosphere. The Ept Commission patrols and defends Ehiv possibly more fiercely than the Ept homeworld, Esmerth.

Eshov is the largest of two moons that orbit the Ept homeworld Esmerth. The surface of the moon is dominated by the Ept Commission's headquarters and military installations. The Grand Esnolia, Director of the Ept Commission Armada lives and commands from this moon base.

Homeworld of the Ept

Esmerth is also known as "The Jewel of Eridani" for it's vast green plains and calm oceans. The land masses of Esmerth are split into 3 vast regions called Echeuhines, Ebrinov, and Eproter. Every major city on Esmerth is dominated by a large pyrimid temple dedicated to the Anunnaki. In the capitol city of Ebloetania the seat of political power, the Director Eylia, is located in the Grand Temple. This same city also houses the main offices of the Galactic Authority. The city of Ebloetania is so large, it covers almost all of the region of Echeuhines. The cities are efficient and beautiful in their simplicity, including the pyrimid temples. Plain-colored stone hewn to perfection and fit together with precision makes up the bulk of Esmerthian architecture. Esmerth also host galactic embassies for the Aquilie, Kornephoros, Roteneve, Sarhgas, and Sol systems.

Homeworld of the Kharis

Homeworld of the Rasch

Headquarters of the Earth Alliance

Homeworld of the Thymos